The Temple of Time 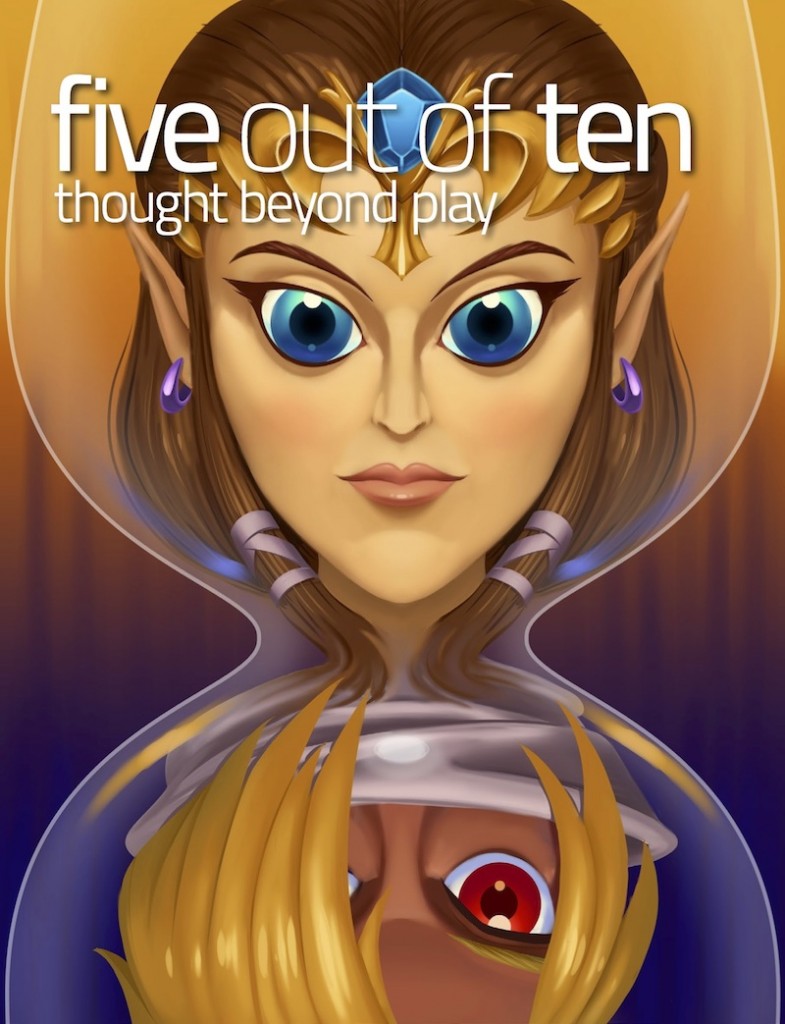 This week is Zelda Week on Five out of Ten! Please enjoy ‘The Temple of Time’, a feature from our ninth issue, Time. If you like this feature, check out our Year Two bundle: almost fifty features across five outstanding issues.

What’s your favourite game? What’s the best game ever? There are millions of possible answers to this question (and none of them are Blinx: The Time Sweeper) but critics and players often vote for The Legend of Zelda: Ocarina of Time. Released for the Nintendo 64 at the end of 1998, it holds a Guinness World Record as the most critically acclaimed game of all time. It tops every magazine reader’s poll. And I… well, I’ve never played it.

Compared to other media like books and music, games are more susceptible to the ravages of time. Most are explicit works of fleeting entertainment rather than lasting cultural titans – see the yearly releases of FIFA and Call of Duty – but they’re also products at the bleeding edge of technology, and technology ages quickly. Ocarina of Time was the first Zelda game rendered in three dimensions compared to the two-dimensional, birds-eye-view of previous Zelda adventures. While modern games are close to digital paintings in terms of art quality, the games of 1998 required imagination to bring life to the angular boxes that populated their worlds. There’s a reason why games pay aesthetic homage to the 8- or 16-bit era: no one wants to go back to the blurry, foggy days of the PlayStation, Saturn, and N64 — even those of us who were there at the time! This is why Ocarina of Time has aged dramatically, but A Link to the Past remains relatively fresh.

After buying a 3DS last year, it was finally time for me to play Ocarina of Time – in the form of its remastered edition. Even the most dedicated collector can’t play everything – especially when I never owned an N64 – and it’s exciting to experience classics like Baldur’s Gate, Super Mario Bros, and Thief for the first time. Ocarina’s legendary reputation precedes it: I’m not an archaeologist in Hyrule discovering new things for the world to see. I’m a tourist, and everyone who has lived there before is acting as a tour guide telling me that I’ve just got to take a trip to the Temple of Time.

Imagine you’re on a holiday in New York City, and you’ve never been before (I’ve never been myself, so I’m imagining along with you). You know the major landmarks – Times Square, the Empire State Building, Liberty Island, Central Park – but you know them second-hand through movies and other peoples’ experiences. A trip to the Hyrule of Ocarina of Time is like travelling to NYC as it was in the past. This is a holiday to someone else’s treasured memories, not an opportunity to make some of your own. This is your dad getting excited about an old Meccano set he found in the attic. This is the horror of retro gaming without the rose-tinted glasses, without the nostalgia.

Stepping out of the Kohiri Forest and onto Hyrule Field for the first time must have been incredible back in 1998. After Link ventures into the depths of the Great Deku Tree and defeats the monsters within, he’s sent to meet Princess Zelda at Hyrule Castle and his quest begins in earnest. Although your course through Ocarina of Time is mostly linear – the equipment Link collects in one dungeon is required to traverse the next – when you leave the forest there’s an unmistakable taste of freedom: morning sunlight, wide spaces to explore, some areas tantalisingly out of reach. But after conquering Skyrim and Fallout 3’s Capital Wasteland, sailing across Wind Waker’s Great Sea – which actually takes Hyrule Field as its sea bed – the spaces feel more constricted, the grass a dirty texture rather than spongy undergrowth. It may seem ridiculous to compare a fifteen-year-old game to a fifteen-month-old game, but our mind does this automatically anyway. Without the inoculation of nostalgia, it’s impossible for me to see the Field in any other way. We can try to understand how it once looked, but can never experience the same feelings. Nostalgia can’t be faked.

This creates problems for a critic, because as a society we are constantly comparing the culture of the past to that of the present. Are the Beatles the ‘greatest band of all time’ because they were exemplary musicians, or were they just in the right place when radio and singles became popular? Are today’s listeners uncultured, or are yesterday’s blinded by nostalgia? Art is always competing with its own legacy. Each reincarnation of Batman or Spider-Man invites comparisons with the actors or illustrators who went before; each new Zelda is competing with every other open-world action adventure and every other Zelda from the past thirty years. This endless, needless comparison war lessens our enjoyment of games and harms the discourse: Wind Waker was derided as a more ‘childish’ game for deviating from artistic form, Twilight Princess stuck to the path that Ocarina of Time established and was criticised for being more of the same. That’s a competition that Nintendo can’t win.

Nostalgia or none, Ocarina of Time is a pretty good game. The 3DS edition is a respectful update that doesn’t change things too much from the original release. One of the notable differences is the inclusion of hand-holding videos that show the player where to go next: despite Nintendo’s reputation for going too easy on players with the ‘Super Guide’ in Super Mario Galaxy 2 and Super Mario 3D Land’s mercy mushrooms that grant invincibility, these are a welcome inclusion. Even with the help of videos, I found myself scouring websites and wikis for advice. Ironically, the most infamously frustrating dungeon in the original release, the Water Temple, is now one of Hyrule’s most satisfying challenges. Sometimes, nostalgia is a barrier to enjoyment. Other times, when Navi the fairy keeps shouting at Link to “Listen!”, old and new players alike are irritated.

When I was growing up, the console wars were raging between Sega and Nintendo. Did you own a Mega Drive (Genesis) or a SNES? Who would win in a fight: Sonic or Mario? While I was firmly on Team Sonic – see ‘A Blur of Blue’ in our fifth issue for all of the tragic details – the correct answer was that both were great! You would think that is the obvious answer, but recently poor Sonic has been the victim of naïve historical revisionism. The argument advanced isn’t that classic Sonic games don’t hold up today – which is pretty reasonable, neither does Super Mario Bros – but that Sonic the Hedgehog wasn’t even a good game in 1991. It’s held as an example of the sheer power of marketing. Sonic is, as one YouTube commentary claimed, “the most overrated game of all time”. Your childhood is a lie. The fun you’re having today is only through a pair of rose-tinted glasses. However, to quote Lewis Clark of SegaDriven’s rebuttal video, that line of thinking is “bollocks”. Games age, and the people who play age too. But to look at a game from 1991 through the lens of 2014 is self-defeating. Ocarina of Time is often a sluggish, confusing and frustrating game, but I’m willing to overlook its sins as a product of the age and enjoy it for what it is.

Lately, I’ve felt apathetic towards new games. I don’t have the enthusiasm that carried me from unwrapping my Mega Drive in 1992 to buying an Xbox 360 in 2007. Is this new breed of games genuinely less good, or is it I that have changed? I don’t think I’ve grown up – that notion is undermined by the Ecco the Dolphin toy on my bookshelf and Knuckles the Echidna on my desk at work. Perhaps the problem isn’t that I have moved on – it’s that I haven’t moved on. I still yearn for the halcyon days of blue-skied Sega arcade machines and the prospect of a new Half-Life.

My gaming malaise comes from nostalgia, a yearning for games “as good as” the past. Yet the truth is that games have never been better, shinier, more inclusive, more diverse, better value, and more compelling. Today’s games aren’t so much in competition with the past as building upon their successes and learning from their failures. The latest Legend of Zelda game, A Link Between Worlds, is both a respectful nod to the series’ past and a modern reinvention of a classic formula.

Nostalgia doesn’t always have to be wistful. It transports you back to a time you loved, but it can also affect the present in surprising ways. A couple of weeks ago, I bought a Wii U and Mario Kart 8 since it seemed like the entire Internet was having fun without me. Even without a childhood allegiance to Nintendo, as the jazz-rock soundtrack kicked in and I raced around Toad Harbour, I experienced a feeling of nostalgia. It was like a classic Sega racing game from the arcades of my youth: exuberant, colourful vistas, precise and nuanced handling. But it also had characters to which I had no history of affection, ‘classic’ courses I’d never driven. It was old and new at the same time. It was fun.

For a new generation of players, today’s games will be tomorrow’s Sonic and Ecco. Someone will care about Mario Kart 8 the way their parents cared about Super Mario Kart, and they won’t feel the same about Mario Kart 16. One day, Ocarina of Time won’t be the best game of all time, and the greatest band of all time will be something I truly despise. But that’s just the way time works. I used to be wary of worshipping at the Temple of Time, but now, I’m learning to embrace my faith.

0 comments on “The Temple of Time”

1 Pings/Trackbacks for "The Temple of Time"